skip to main | skip to sidebar

The American Kennel Club has a problem with the overwhelming popularity of Labrador retrievers, it seems.  Labs are just too popular for their own good, so the AKC says little about Labs, and AKC judges hardly notice them at conformation shows (see previous blog). 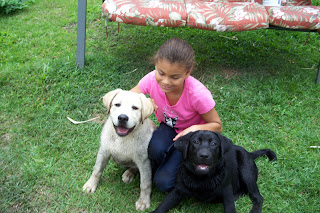 Granddaughter with puppies Cody & Charles
AKC's behaviors led me to wonder if the USA is the only country with a big Lab problem.  With more difficulty than I imagined, I did find data on Labs' annual registrations with major kennel clubs in other countries.  How popular are Labs in other countries?  Here's the Table:

Labrador Retriever Annual Registrations by Country, 2005-2006
Popularity of Labs in the US lags far behind other Lab-loving countries, such as Sweden, Australia, Finland, and the UK.  Sweden has 4 1/2 times as many Labradors per capita as the US.   Even Canada has twice as many Labs per capita as the US.  Discussions of Labradors' popularity in other countries mentioned that, compared to other breeds of roughly the same size, Lab registrations are 2 to 4 times higher than the next large-dog breed (usually Golden retrievers or German Shepherds).

Suppose the US had as many Labradors per capita as Sweden does. There would be 174,000 Labs registered per year with the AKC, far greater number than the 38,000 registered in a good year. At any one time, the AKC could have a million registered Labrador retrievers.

It's hard to imagine how the AKC would react, if Labs' popularity increased four-fold, relative to other breeds.  Perhaps, the AKC should accept Labs for the hugely popular breed they are around the world and give them the attention they deserve.  Being recognized in AKC conformation shows would be a good start.
Posted by Raw Meaty Bones For Pets at 1:42 PM

Raw Meaty Bones For Pets
Holualoa, Hawaii, United States
As breeder of Labrador retrievers for twelve years, I have tried kibble, BARF and Raw-Meaty-Bones diets with my dogs and puppies. Before retiring to breed Labs and to grow Kona coffee in Hawaii, I was Commonwealth Professor of Psychology at the University of Virginia and an award winning researcher in behavioral genetics and developmental psychology. You can find my biography in Who's Who in the World, Who's Who in America, Who's Who in Science and Technology, and in Wikipedia. My scientific background is relevant to the topic of pet diets, because I can evaluate the research purporting to support bad pet feeding practices. I can also point out the obvious gaps in pet nutritional research, gaps caused by pet food companies' control of what studies are funded. The unholy alliance of pet food companies, veterinarians, and animal welfare groups (who also depend on pet-food funding) is costing pet owners worldwide billions of dollars in diet-caused illnesses and causing unmeasurable suffering and premature deaths for hundreds of millions of pets. This money-driven cabal has to be exposed and stopped.