skip to main | skip to sidebar

In mid-October, Saturday Night Live did a skit on commercial dog food. Skit opens with Jason Sadakis and his Golden retriever in a park, playing, cuddling, and enjoying time together. 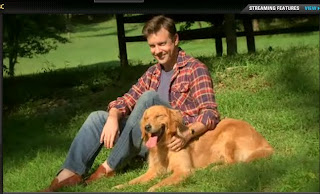 Next he shops for dog food in a store aisle lined with giant bags of kibble. He selects a huge bag of a brand labeled “Mostly Garbage”. 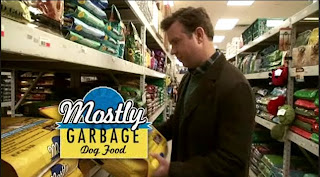 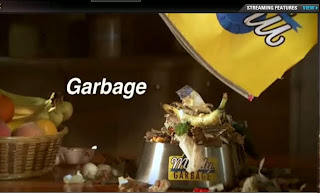 Sadakis explains he has other bills to pay. Mostly Garbage, he says, is good enough for a dog. Sadakis poses beside the Mostly Garbage bag and tells viewers he feeds this stuff to his dog, because in these tough economic times, he wants to heat the house and feed his children. How healthy is Mostly Garbage? He doesn’t know, but it’s fortified with 8 essential vitamins and riboflavin.  Bag says "Complete Nutrition". 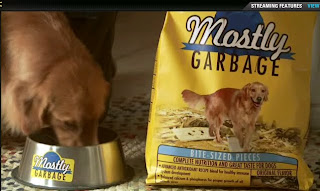 How does it taste? He doesn’t know – it's dog food!  Is Mostly Garbage good for his dog?  He doesn’t know. But, heck, this morning, he says, the dog ate real garbage, and then he got into the cat litter box and ate poop. He thought about stopping him but, oh well, he seemed to be enjoying it. He feeds his dog Mostly Garbage, because he’s just a dog.

As with most Saturday Night Live skits, the Mostly Garbage message about dog food is complex and stinging. The juxtaposition of loving owner, playing with a beautiful, purebred dog in an idyllic park, followed by feeding him garbage is pointed satire on pet food. Although kibble does not appear to be garbage, viewers are reminded of what’s really in the bag – garbage fortified with vitamins and riboflavin.

The message that feeding garbage to your pet is okay, because he’s “just a dog”, reminds viewers of how they feel about their dogs. Their dogs are family members, not to be dismissed as “just a dog”. So why are they feeding him vitamin-fortified garbage in a bag?

Will feeding the dog garbage save enough money to heat the house and feed the children?  Of course not!  So, why are they feeding their beautiful, expensive Golden retriever garbage?

Is kibble good food for dogs?  No, it's not.  Badly nourished, desperate dog is foraging in garbage and eating cat poop.

The garbage dog food skit follows directly after the Ryan Reynolds opening and the now-famous parody of President Obama reviewing accomplishments of his first year in office. The President ticks off a list of things he has not done and says he has accomplished nothing, nada. This skit, and the whole SNL episode, will doubtless receive an enormous number of viewings.

Yes, kibble is mostly garbage – not the unprocessed trash shown in the video but garbage nonetheless. Thank you, Jason Sadakis and Saturday Night Live, for bringing this fact to pet owners’ attention.
Posted by Raw Meaty Bones For Pets at 10:02 AM

Raw Meaty Bones For Pets
Holualoa, Hawaii, United States
As breeder of Labrador retrievers for twelve years, I have tried kibble, BARF and Raw-Meaty-Bones diets with my dogs and puppies. Before retiring to breed Labs and to grow Kona coffee in Hawaii, I was Commonwealth Professor of Psychology at the University of Virginia and an award winning researcher in behavioral genetics and developmental psychology. You can find my biography in Who's Who in the World, Who's Who in America, Who's Who in Science and Technology, and in Wikipedia. My scientific background is relevant to the topic of pet diets, because I can evaluate the research purporting to support bad pet feeding practices. I can also point out the obvious gaps in pet nutritional research, gaps caused by pet food companies' control of what studies are funded. The unholy alliance of pet food companies, veterinarians, and animal welfare groups (who also depend on pet-food funding) is costing pet owners worldwide billions of dollars in diet-caused illnesses and causing unmeasurable suffering and premature deaths for hundreds of millions of pets. This money-driven cabal has to be exposed and stopped.